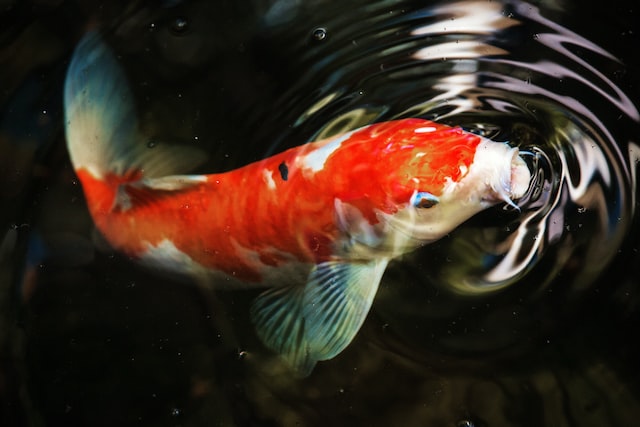 One of the most recognizable fish types is the koi, which is known for its brilliant colors. Their color is what has made them such a popular choice for many fish owners as a pet. A koi fish is almost the adult version of a goldfish.

Along with their lovely appearance, koi fish have long been associated with good fortune, strength, and courage. So, if you’re captivated by this beautiful fish, take some time to learn more about the lifespan and life cycle of the koi fish.

Let’s find out what makes koi fish so special!

A Quick Overview of Koi Fish

The koi fish is a type of carp. They live in freshwater bodies of water such as ponds. Koi carp domestication began in 4th century China. Today, there are over 100 varieties of Koi, with many more yet to be discovered.

While many people believe that the exterior of a koi is the only thing that makes them a popular pet, this is only half the story. Actually, koi fish are quite intelligent. Koi, like other fish, can recognize their owners if they are regularly cared for by the same person or people. They have also been observed to recognize their own names and to accept being stroked by their owners. They are also very gentle and are almost never aggressive towards humans.

Let’s learn more about the average koi fish lifespan now that we’ve gained a better understanding of the koi fish.

Owning koi fish can be a significant commitment, not because they are hard to upkeep (the only lower maintenance pet is a pet rock), but because of the koi’s lengthy lifespan. Outside of Japan, the typical koi breed has a lifespan of fifteen years, whereas the average Japanese koi has a lifespan of forty years. So, what’s the deal with these disparities in averages? This enormous disparity in life expectancy can be attributed to a number of factors.

Because Japan is the motherland of koi fish, breeders there have had the opportunity to considerably improve the gene pool. Even when koi were initially brought to cultures outside of Japan, the best koi didn’t even leave Japan, implying that Japanese koi are far superior to “domestic koi.” To compare with the beauty of Japanese koi, western breeders have bred koi to grow faster, which has resulted in a reduction in their lifecycles over time.

In their zeal to create koi that can compete with Japanese koi, western breeders frequently eat their koi on an overly rich diet, which leads to weight gain and premature mortality. Japanese breeders, on the other hand, frequently relocate their fish to big earth dams throughout the summer, allowing them to forge and develop weight and strength in a natural method. This is not something that the average koi parent can do, but by avoiding overfeeding, obesity can be prevented and your koi’s lives can be extended.

Because Japanese winters are bitterly cold, koi raised there spend longer time nesting than koi raised in most western societies, and growers usually keep ponds warmed enough to prevent koi from hibernating in the winter. Breeders in the west frequently skip this hibernating phase because koi do not acquire much (if any) bodyweight during it by heating their ponds to replicate summer temperatures. This hibernation considerably extends a koi’s longevity; in fact, being nurtured in a chilly climate has been one of the causes Hanako (the world’s oldest koi goldfish) lived to the age of 226.

The lifespan of a Japanese koi differs from that of a “domestic” koi depending on the nature of koi fish as well. Newer variations of koi, like the Utsurimotno, are more similar, although the oldest varieties, such as the Kohaku, vary greatly relying on where they come from. However, the koi longevity is largely determined by how well the owner cares for it; if you give your koi a well-balanced diet and keep your pond in good condition, your fish will live a long and happy life regardless of where it comes from.

Were you shocked by the differences between Japanese and “domestic” koi? I certainly was! Another element that I didn’t mention that possibly contributes to the low lifetime of koi in developed nations is our lack of experience with keeping koi. We’ve lost a great deal of koi as a result of blunders we made when we first began out as koi parents. Sign up for our life and flourish short course if you want to learn about our mistakes as well as how to avoid them.

4 Oldest Koi Fish in the World

Outside of Japan, the average lifespan for koi fish is about 15 years, while it is 40 years in Japan. According to legend, koi fish may live much longer under ideal conditions, and there are numerous koi who survive for more than 100 years. Most of them are simply rumors, as most koi only survive a few generations. The longest koi on this list, on the other hand, survived for over two hundred years and had its age officially validated. The other koi on this list may not have lasted as long, but their ages were publicized and they made headlines for being some of the largest koi ever.

Big Poppa is a strange huge koi who has been residing in the pond of Houston’s Discovery Green Park for the past six or seven years. The park claims that they have no idea how or when Big Poppa arrived at the site. Visitors to the park have spotted the giant koi fish for several years, and in 2017, the park got to see just how enormous Big Poppa truly is.

Because Discovery Park needed to drain the lake to remedy a leak, they had to capture Big Poppa and store him in a temporary tank. According to Ren Mitchell, marketing director for Discovery Green, when they finally apprehended Big Poppa, everyone was astounded by his size. Big Poppa, according to Mitchell, is much more than 2 feet (0.6 m) long and weighs more than 20 pounds (9.07 kg). Big Poppa was transported to Nelson’s Water Garden in nearby Katy, Texas after being taken from the park’s lake.

Geoff Lawton, Big Girl’s owner, purchased the gigantic koi from a skilled breeder in Japan. Lawton, who owns the Rainbow Koi business in Wiltshire, England, stated that Big Girl was the biggest koi ever brought from Japan and that a koi as enormous as Big Girl had never been seen in Britain before. Lawton was storing Big Girl in a special exhibition pool at his fish shop at the time and said he had no intention of selling her. Lawton said that if he ever chose to sell Big Girl, he would not accept less than £30,000 (about $40,000).

Because of her incredible age, Hanako is likely the most popular koi fish in history. Hanako was thought to be 226 years old when she died in 1977, making her the world’s oldest koi fish.

Hanako’s incredible story originally came to light when her former owner, Dr. Komei Koshihara, made a national broadcast to all of Japan on Nippon Hoso Kyokai radio station. Dr. Koshihara described how he inherited Hanako from his mother’s side of the family. Hanako was 215 years old, 7.5 kg (16.5 lbs), and 70 cm (27.6 in) long at the time of the transmission.

Dr. Koshihara was aware of Hanako’s age since he had it confirmed by professor Masayoshi Hiro, who worked for him.

Nagoya Women’s College’s Laboratory of Animal Science For two months, two of Hanako’s scales were taken and studied. Professor Hiro was able to calculate Hanako’s age by counting the growth rings on her scales.

Do Octopus Have Teeth, How Long Does an Octopus Live

Betta Fish Facts: How Many Times Do You Feed a Betta Fish